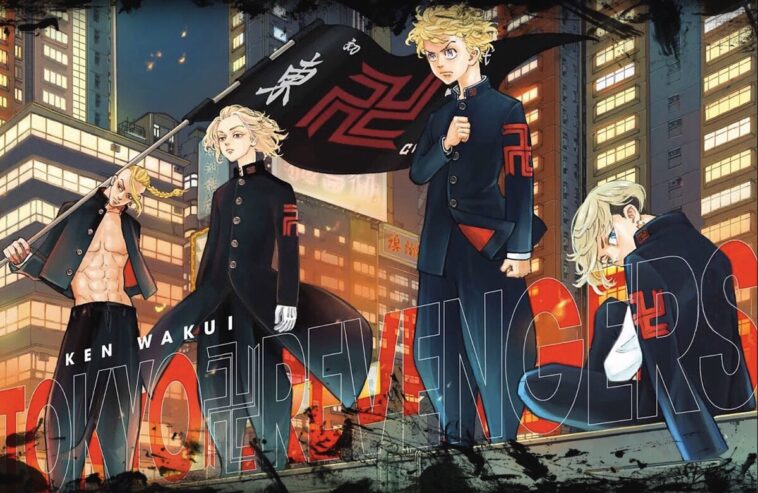 Born on August 20, 1990
Height: 162 cm
Weight: 56 kilograms
Blood type: B
Loves to ride his CB250T (Babu)
Has a biological brother, Shinichiro, and a half-sister, Emma.
Refers to Takemichi as takemicchi.

Born on May 10, 1990.
Height 185 cm
Weight 75 kilograms
Blood type O
His favorite machine is Zephyr 400 Custom
Has a tattoo of a dragon on his temple and gold pigtails as his trademark
Lives in a brothel in Shibuya.

Born on November 3, 1990
Height: 175 centimeters
Weight: 58 kilograms
Blood type: AB
Loves to ride his Goki (Suzuki GSX250E Katana)
Stayed away from school when he was in the eighth grade
During fights, she ties her long black hair into a single elastic band.
Likes Peyoung
Childhood friend of Mikey (used to go to Mikey’s grandfather’s karate dojo)
In order to save Kazutora and expose Kisaki’s scheme, he joined the Valhalla

Born on December 19, 1991
Height: 168 centimeters
Weight: 58 kilograms
Blood type: O
His favorite machine is the Goki.
Was rescued by Baji when he was tangled up with a motorcycle gang called “Mandara,” and ever since then he has respected and admired him.
The first person to whom he used honorifics was Bachi.
After Bajoji’s death, he nominates Takemichi as the captain of the 1st Division
Is one of the few people who knows that Takemichi is a Timelyper.

1st Division Captain
The main character of this work, Timelyper

Born on June 25, 1991
Height: 165cm
Weight: 55kg
Blood type: A
Likes potato chips
Motorcycle is CB250T (Babu)
Appointed by Chifuyu to be the captain of 1st Division after the death of Bajoji after Bloody Halloween

Born on October 18, 1989
Height: 177 cm
Weight: 64 kilograms
Blood type: B
His favorite machine is the RZ350
Childhood friend of Kui (Coco).
The bruise on the left side of his face is from a fire that broke out in his parents’ house when he was in elementary school.
Has been a member of Izana’s 8th generation “Black Dragon”, and after being released from the reformatory, he and Koko have been loyal to Daiju, who revived the “Black Dragon”.
After Da Kotobuki’s defeat in the “Holy Night Battle,” he and Koko, the eleventh member of the “Black Dragon,” joined Tokyo Manji Gang and volunteered to join Takemichi’s First Division.

The tenth “Black Dragon”commander.
He is also a member of the Tokyo Manji Gang 1st Division
Also known as Koko.

Born on April 1, 1989
Height: 174 cm
Weight: 60 kilograms
Blood type: A
A genius who creates money
When he was in the third year of junior high school, he pledged his allegiance to Daiju in order to revive the “Black Dragon” upon Inui’s release from prison.
Has a sincere side to Inui, and basically only listens to what he says.
After the defeat in the “Holy Night Battle”, he abandoned Daishu to follow Inui and joined the Tokyo Manji Gang.

Captain of the 2nd Division of Tokyo Manji Gang

Born on June 12, 1990
Height: 170 cm
Weight: 57 kilograms
Blood type: A
His favorite aircraft is the Impulse.
Famous saying: “Don’t hate the environment you were born into.
Is good at sewing and is the head of the Handicraft Club.

Born on September 4, 1991
Height: 183cm
Weight: 78 kilograms
Blood type: O
Adores his rotten friend Mitsuya, so much so that he has him as a standby image on his cell phone.
Is the younger brother of Daiju, the tenth president of the Black Dragon, and his older sister is Yuzuha.
Since his mother’s death, he has been protected by his sister Yuzuha from the violence of his brother Taiju, but he lied to her that he was protecting her. However, after seeing Takemichi’s courage in the “Holy Night Battle,” she comes out and stands up to Taiju.

Born on February 24, 1991
Height: 164 cm
Weight: 80 kilograms
Blood type: O
Loves to ride his CBX400F
Entered a juvenile reformatory after stabbing Chouchi, the president of Aibai Aibai, to avenge his best friend’s death.
In modern times, he is a wealthy man who inherited his parents’ construction business. He is also married.

Born on October 15, 1990
Height: 176cm
Weight: 56 kilograms
Blood type: B
His favorite machine is Z400FX (FEX)
Pah-chin’s buddy
Is an idiot, but he is very strong in a fight.
Has a line that he always says when the stupid Per-Chin makes fun of him.

Born on January 18, 1991
Height: 182cm
Treated Takemichi like a slave before he changed his past, and was the one who started to ruin Takemichi’s life.
Was the organizer of a fight gambling game, and was beaten up by Mikey and Draken when he half-killed Takemichi.
Out of resentment, he conspires with the members of “Aimi Aichu” in the “8.3 War” and plans to kill Draken.
Stabs Draken and causes him to suffer serious injuries, but before he can finish the job, Takemichi strangles him and he faints.

Captain of the Tokyo Manji Gang after Pah-chin’s surrender.

Born on January 20, 1990
Height: 164cm
Weight: 58kg
Blood type: A
Is a calculating and scheming person who uses his own hands to ensnare his opponents.
Is the source of the transformation of modern-day Higashimanji into a criminal organization, and is Takemichi’s sworn enemy.
Used to have feelings for Hina, who attended the same cram school as him in elementary school, but when he realized that Hina had feelings for Takemichi, he resented her.
In the present day, he has turned into a stalker, killing Hina after she refused his proposal. He is the one who raised Chouchi of Aimai Aishu to the position of chief of Shinjuku, and is the one who hunted down Parchin and started the war with Azuma Manji.
Was the mastermind behind the “8.3 War,” “Bloody Halloween,” “Holy Night Battle,” and “Kanto Incident,” but all of them ended in failure due to Takemichi’s success.
While fleeing the Kanto Incident, he was run over by a dump truck and killed.

Captain of the 4th Division of the Tokyo Manji Gang.
Also known as Smiley. As he says, “Underneath the smile is a demon,” he always has a smile on his face, but he has a cold heart.

Born on May 25, 1989
Height: 170cm (including hair volume)
Weight: 56 kilograms
Blood type: B
His favorite machine is RZ250
In the past, he was the chief of a motorcycle gang called “Sugoak” (双悪), and in the present, he runs a ramen shop called “Sugoak” with his younger brother, Souya.

Born on May 25, 1989
Height: 170cm (including hair volume)
Weight: 56 kilograms
Blood type: B
Twin brother of Nahoya.
His nickname is Angry, and he always has an angry face, as in “the heart of an angel with a pissed-off face.
Together with Nahoya and Souya, they are known as the “Twin Devils of Meguro.
When he cries, his limiter comes off and he becomes a demon.

Captain of the Tokyo Manji Gang
Also known as Mucho.

Born on April 28, 1987
Height: 187 cm
He is the strongest fighter among the captains of the Tokyo Manji Gang, and is known as the “Public Morals Officer” of the Tokyo Manji Gang.
Is a member of the “S62 Generation” and was friends with Izana Kurokawa when they were in juvenile training school.
Was a founding member of Kersey, and when Izana started a war with Azuma Manji, he left Azuma Manji and joined Kersey.
Takes care of the aftermath of the Kanto Incident, and is sent to a juvenile reformatory with other Tenjiku leaders.
After his release, he is brutally murdered by Sanzu.

Born on November 7, 1990
Wears a mask to hide the two scars around his mouth.
When Mucho left Azuma Manji, he joined up with the other corporal members in Jersey.
After the Kanto Incident, his whereabouts were unknown, but later in the present day, he reigned as the number two of the Bonze.
He also removes his mask.

He is the former acting president of “Moebius” and the first vice president of “Valhalla”, but he became the captain of “Tokyo Manji Gang” Rikubantai under Kisaki’s guidance.

Born on October 27, 1989
Height: 192cm
Weight: 70kg
Blood type: AB
Is Kisaki’s partner in crime.
His habit is to say “Dally.
His fighting ability is at the level of Draken.
Has “Sin” tattooed on his left hand and “Punishment” tattooed on his right hand.
Fought against Azuma Manji as the acting president of “Aimai Aishu” in the “8.3 War”, and also fought against Azuma Manji in the “Bloody Halloween” as the first vice president of “Basara”, but was knocked out by a kick from Mikey.
After this war, he joined Azuma Manji with the help of Kisaki, and became the captain of the newly established Rikubantai.
Was involved in the “Holy Night Decisive Battle” and the “Kanto Incident” with Kisaki, but later he was wanted as an accomplice to a murder and is on the run.

Born on September 16, 1990
Height: 174 cm
Weight: 60 kilograms
Blood type: AB
His favorite machine is the KH400 (Ketch)
Has a tattoo of a tiger on his neck and wears a bell piercing.
Was a founding member of the Azuma Manji, but due to unforeseen circumstances, he killed Mikey’s brother Shinichiro and was sent to a juvenile reformatory.
After his release, he became the No. 3 of the Valhalla and the ringleader of the “Bloody Halloween”.