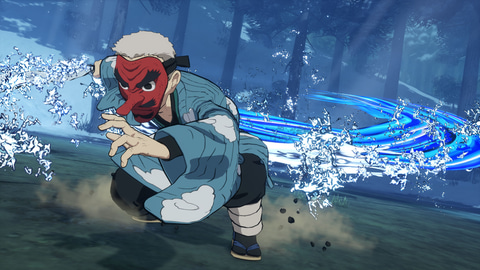 Aniplex has announced that Sakonji Urokodaki, the “nurturer” of the main character Tanjiro and the water Hashira Giyu Tomioka, and an experienced swordsman who once defeated evil demons as a water Hashira, will be joining “the Demon Slayer: Kimetsu no Yaiba Hinokami Keppu-tan battle action game for PlayStation 5/PlayStation 4/Xbox Series X|S/Xbox One/PC (Steam).

“The Demon Slayer: Kimetsu no Yaiba Hinokami Keppu-tan” is a battle action game based on the TV anime “Demon Slayer: Kimetsu no Yaiba” developed by Cyber Connect Two. In addition to the solo mode in which players can relive the story of Tanjiro and his fight against demons, the game will also feature a Versus mode in which players can freely combine two characters from the anime to play 2v2 against each other.