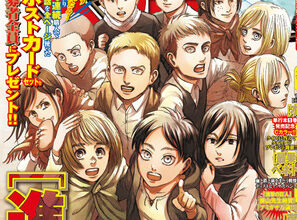 The final 34th volume of “Attack on Titan,” which concluded in the May issue of “Bessatsu Shonen Magazine,” is scheduled to be released on June 9, 2021, and it has been announced that there will be two special edition versions with different booklet contents and retailers.

The two special editions will be called “Beginning” and “Ending”, and will have different booklets and retailers.

“Beginning” comes with a booklet that contains two phantom stories that were submitted to the “Serialization Conference” for serialization in the first issue of Bessatsu Shonen Magazine, and “Ending” comes with a booklet that contains the names of the 138th and final story that Isayama wrote in his notes for meetings and drawing.